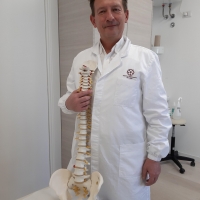 Up to 1990 he has practiced his profession firstly in Denmark, then in Italy at San Benedetto, Tronto.
1990 – present: Private practice at Sanrocco Chiropractic Centre.
1991 – 1997: Supervisor of the Italian Association of Applied Kinesiology.
1999 – 2000: Member of the medical team as Chripractor for Juventus Football club.
2000: Chiropractor of the World Rowing Championship in Zagreb.
2003 – present: Collaborating with Dr. Meersseman in the medical team for Milan Football club.